We have created a space that is reverent to Italian food inspirations and culture, where diners can enjoy an authentic Italian dining experience.

With an interior inspired by the Amalfi Coast and a menu full of fresh, flavorful Italian favorites, you’ll feel miles away from the dazzle and glitz of Las Vegas, even though we’re minutes away from the Strip. 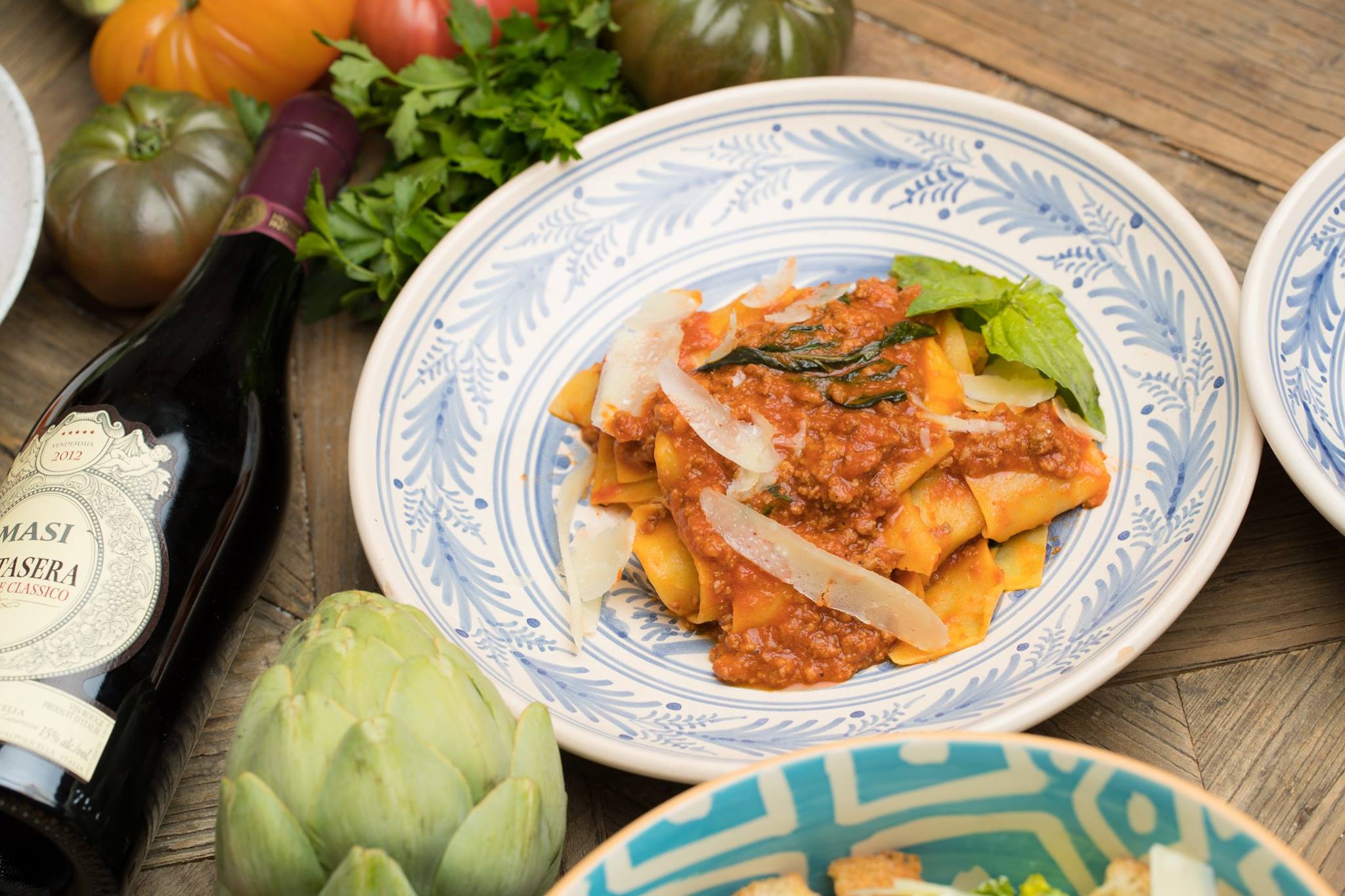 Bottiglia Cucina & Enoteca isn’t actually located in Italy, but it feels like it!

Bologna is a centuries-old city in the Emilia-Romagna region of Northern Italy. It’s one of the larger cities in Italy, with a bustling metropolitan area that is densely packed with history and culture.

Perhaps one of Bologna’s most famous culinary contributions is Bolognese sauce, a hearty, thick, flavorful meat-based sauce that is traditionally served with a flat, sturdy pasta shape like pappardelle.

At Bottiglia, you can enjoy our version of this famous sauce in several dishes, including our

Pappardelle Bolognese, which is prepared with San Marzano tomatoes, pancetta, and red wine; it’s also served as a dipping sauce alongside our Arancini appetizer.

We even have a not-so-traditional version of Bolognese that’s perfect for the veggie/vegan set: our Vegan Spaghetti Bolognese is made with a chickpea Bolognese, and served with almond ricotta.

This region is home to several coastal towns in Southern Italy. Calabria is well known for its foods, and is particularly famous for its chili peppers, even hosting a yearly festival during which the peppers are one of the stars of the show.

The inimitable flavor of Calabrian chili is on show in several dishes at Bottiglia, including our 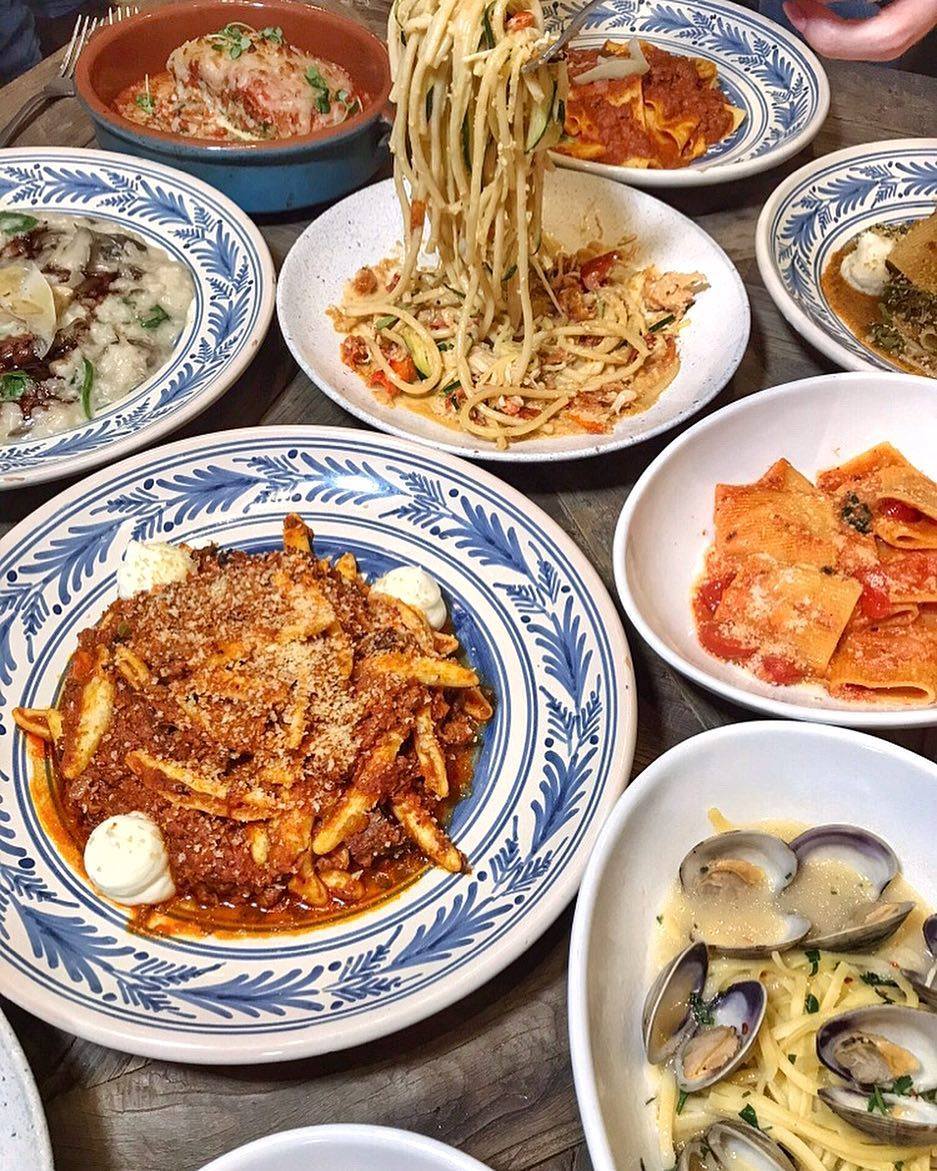 The Campania region is located in Southern Italy, and it’s famous for its wine and cheese.

The cheeses of Campania are the stuff of legend, including mozzarella, ricotta, provolone, and caciotta (a type of goat’s milk cheese). One of the most unique and prized cheeses from the area is called mozzarella di Bufala, or buffalo mozzarella. This mild, creamy mozzarella is made using buffalo milk, and it’s simply unlike anything else!

Another classic dish associated with the Campania region is spaghetti alle vongole, which translates as “spaghetti with clams”.

Try our take on this beloved dish with our Linguini Vongole entree, which is made with garlic, white wine, and clams.

This is a town located in Sicily. You’ve undoubtedly heard of the famous wine that comes from this area!

Milan is famous for its fashion, but it’s also the home to many famous Italian dishes, including piccata. This is a preparation where the food (usually sliced meat or fish) is sautéed and served with a sauce made from lemon, butter, and capers. Piccata comes from the French word piqué, which means sharp–referring to the pleasant bite that this zingy sauce offers.

We offer two types of picatta at Bottiglia: Veal Piccata and Chicken Picatta. Both respective dishes are served with a sauce made from lemon, capers, and white wine.

This is a region in the northwestern part of Italy, bordering France and Switzerland. Culinarily speaking, it’s the key truffle region of Italy. Truffles, with their earthy flavor, are considered a delicacy all the world over. Sample the luxuriant flavor for yourself with our Wild Mushroom Tagliatelle, which is made with black truffle cream, burrata, and garlic crumbs.

Yup: we have dishes inspired by Roman works of (culinary) art, too!

Did you know that Pasta Carbonara (a pasta dish with a rich, creamy sauce featuring Italian bacon) is of Roman descent?

We have our own version featured on our menu as a side dish with our Carbonara Mac & Cheese, which is made with guanciale, peas, and parmesan.

Fiori di Zucca is another popular Roman snack, made from zucchini flowers that are stuffed, battered, and fried. On the Bottiglia menu, you can try our Zucchini Flowers, which are served with lemon ricotta and aioli.

While Bottiglia Cucina & Enoteca is largely inspired by the Amalfi Coast, our menu also captures several of the best dishes from all over Italy. We hope that you’ll come visit us soon so that you can enjoy the delicious flavors of Italy in our peaceful Green Valley Ranch Italian restaurant!

What’s are your Italian Food Inspirations?