Crispy lettuce. Crunchy croutons. Salty-rich parmesan cheese. And let’s not forget that completely crave-worthy creamy, tangy dressing. Caesar salad is a special dish indeed, and acts as the perfect beginning to what promises to be a memorable meal.

While many consider the Caesar salad an Italian masterpiece, the truth is that the salad doesn’t hail from Europe at all, but from Mexico. Really!

So how on earth did this salad become the centerpiece of so many meals and a classic known all around the world? Here, we’ll explore the unexpected and fascinating history of the Caesar salad.

What is Caesar salad? OK, before we delve into the history of this superlative salad, let’s get clear on what makes it up. A traditional Caesar salad is composed of lettuce, parmesan cheese, and croutons. But what really makes it special is the dressing in which it’s tossed, which features an odd-sounding combination of anchovy, egg, oil, parmesan, and lemon juice. The mixture is emulsified (a method of binding two things together that don’t naturally combine, like oil and acid), yielding a creamy, tangy, and overall lick-the-plate-worthy dressing.

At Bottiglia, our classic Caesar salad is topped with focaccia croutons, and will absolutely get you excited to eat your veggies.

Who created caesar salad? Well, there are some historical quibbles on the subject. According to George Leonard Herter in his book The Bull Cook and Authentic Historical Recipes and Practices, the salad was actually invented in the early 1900s by a Chicago chef, and was named after Julius Caesar. However, while worth noting, this claim doesn’t seem to have much evidence to back it up.

Even if this salad concoction did exist beforehand, it’s undoubtedly the Cardini family who made it famous. 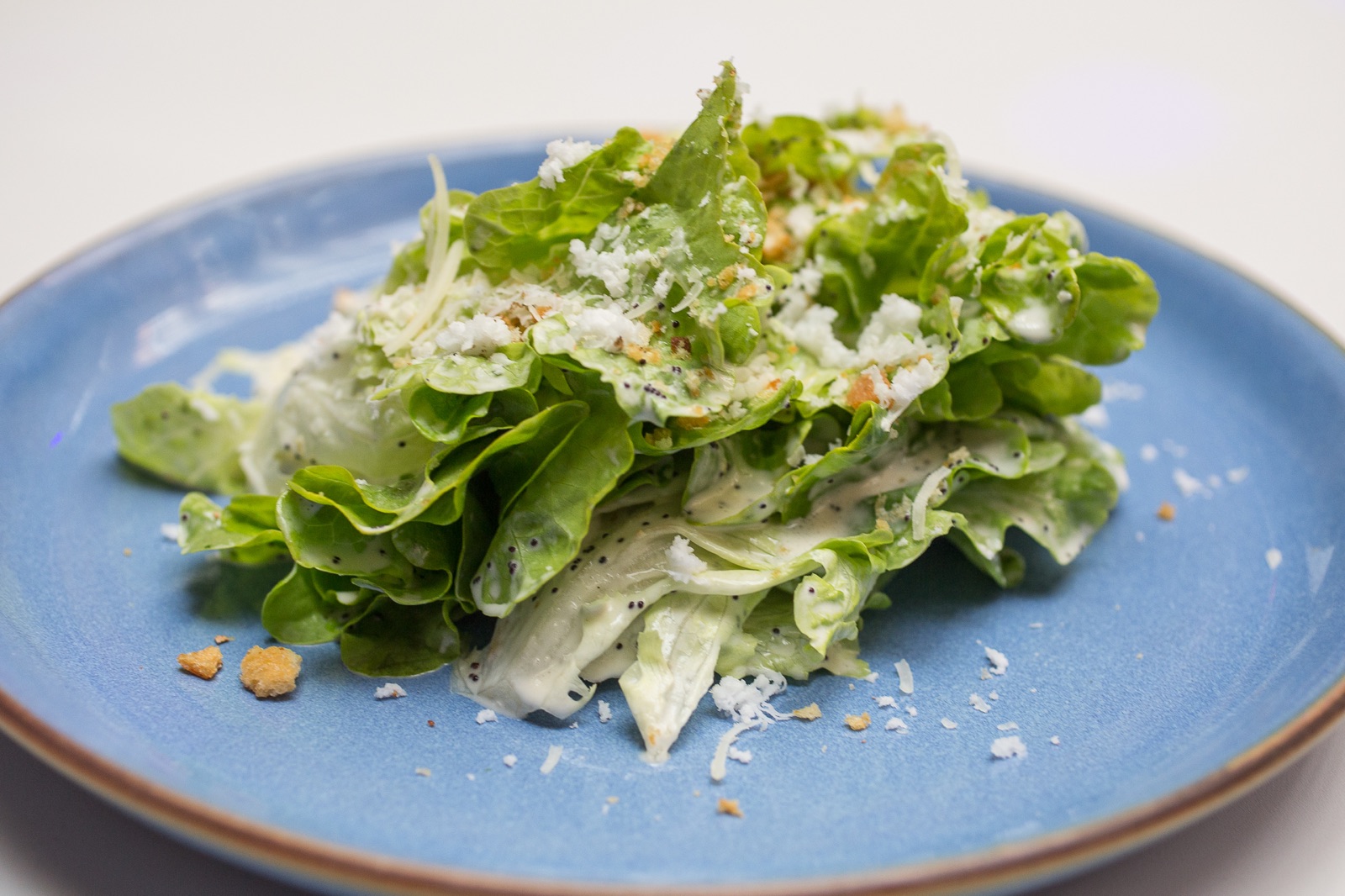 Caesar Cardini was a restaurateur who founded the extremely popular (more on why it was so popular in a moment) restaurant, cleverly titled Caesar’s Restaurant, in Tijuana, Mexico (as a side note, the restaurant is still around, in case you’re planning a road trip). As the story goes, on Fourth of July weekend in 1924, a customer rush left the restaurant low on food. Rather than close up shop, Caesar made clever use of the ingredients on hand and created what might now be considered the Beta version of the Caesar salad.

According to a later interview with Cardini’s daughter, she revealed that this original version featured entire lettuce leaves, which were intended to be eaten by hand by lifting the stem; the dish also featured coddled eggs and olive oil. Perhaps it would have looked a bit like this, if the egg were coddled: 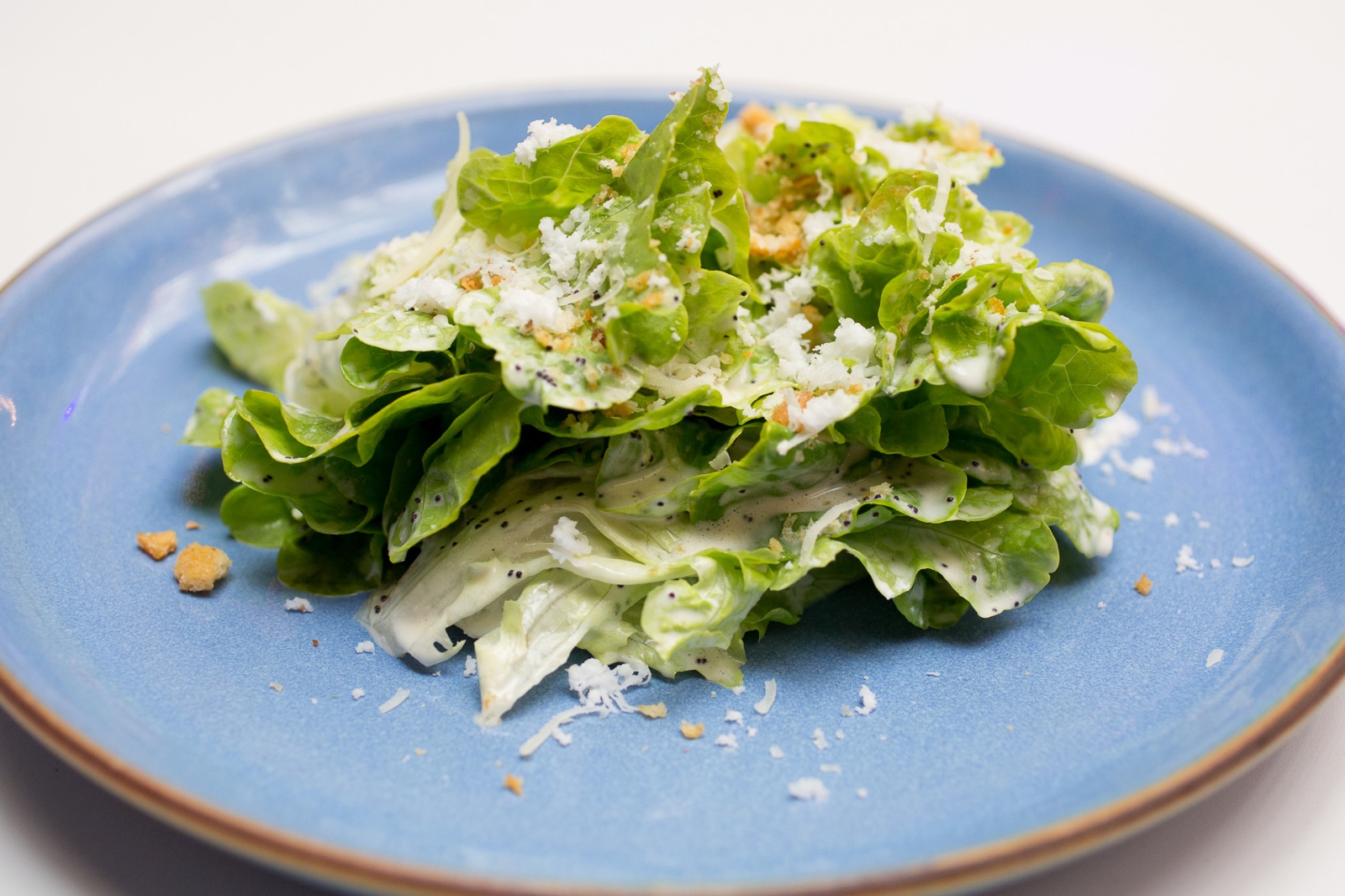 However, it’s likely that while he provided the spark of inspiration, the Caesar salad of today should more likely be credited to someone else. Many say that it was the handiwork of Caesar Cardini’s brother, Alex. A few years later, Alex began working at the restaurant, and tinkered with the construction of the salad, altering the presentation by tossing it and including the infamous anchovies. An aviator in the war, the salad was popular among his high-flying friends, and he is said to have referred to it as “Aviator’s Salad”. Of course, some claim that Alex was the true creator of the salad, creating it independently of Caesar’s Fourth of July creation. Others claim that it was a friend who championed the recipe, which was poached by Caesar.

Regardless of whose idea it was and how it evolved, one thing is crystal clear: people really, really liked the salad, and the dish became quite fashionable. Here’s where timing and the restaurant’s popularity came into play. At this time, prohibition was in effect in the United States, but not in Mexico. So it stands to reason that people from nearby San Diego or even Los Angeles might make pilgrimages to visit restaurants where they could get great food and booze, too. So while the restaurant (and salad) probably would have been well-received anyway, prohibition propelled both the restaurant and the Caesar salad to stratospheric levels of popularity.

Julia Child herself speaks fondly of making such a pilgrimage with her parents in her book From Julia Child’s Kitchen:

“One of my early remembrances of restaurant life was going to Tijuana in 1925 or 1926 with my parents, who were wildly excited that they should finally lunch at Caesar’s restaurant.  Tijuana, just south of the Mexican border from San Diego, was flourishing then, in the prohibition era. . . Words spread about Tijuana and the good life, and about Caesar Cardini’s restaurant, and about Caesar’s salad.”

Later in his life, Caesar Cardini spoke to how the salad made the jump from Mexico and Southern California to nationwide sensation, citing that a Hollywood fixture and man-about-town named Manny Wolfe shared the recipe with various restaurants, thus increasing the appeal. By mid-century, the salad was being offered by the famed Waldorf-Astoria Hotel, which at that time would mean that it had “arrived”.

Other sources reveal that a Mrs. Wallis Warfield Simpson (who would eventually marry Prince Edward VIII of Wales) is the one who took the concept of the salad to Europe. She tried the salad on one of her many trips, and took the concept back to Europe with her; she is also credited with pioneering the salad being served with bite-sized pieces of lettuce.

Here’s a fun fact: in 1948, Caesar Cardini began bottling the signature dressing and selling it under trademark. It’s still sold under the name Cardini’s Original Caesar Dressing, and distributed around the nation.

Moreover, it’s not hard to see why the legend of this salad continues. Its story features mystery, intrigue, international travel, and even Julia Child! It’s no wonder that the International Society of Epicures in Paris dubbed the Caesar salad the “greatest recipe to originate from the Americas in fifty years.”

Head on over to Bottiglia Cucina Enoteca to see for yourself if Caesar salad tastes even better than usual now that you know the interesting story behind it!

When is the last time you had a Caesar salad?