Say cheese! When it comes to Italian cuisine, cheese is an ingredient of extremely high importance. From creamy ricotta-filled lasagna to freshly grated Parmigiano on top of a steaming plate of pasta, cheese is the not-so-secret ingredient that makes Italian cuisine so deliciously crave-worthy.

Italy is one of the biggest cheese producing areas in the world, boasting well over 450 varieties. While it would require a book (or perhaps volumes) to adequately cover all of them, we’ll start simple. Here, we’ll discuss five must-know Italian cheeses which are commonly used in Italian cooking, all of which make an appearance on the Bottiglia menu! 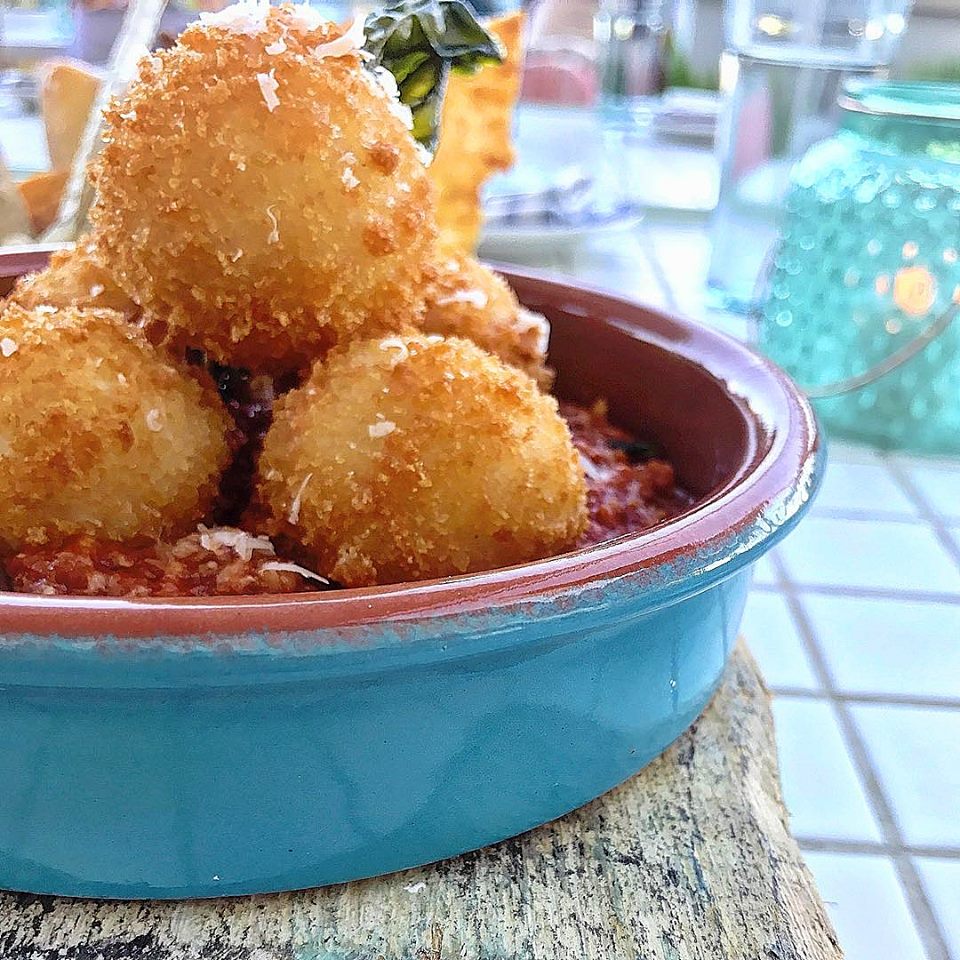 Fontina: This is a cow’s milk cheese hailing from the high elevations of the Italian side of the Alps. While it is made throughout the year, the most prized fontina is made during the summer, when cows feast on the fresh and abundant grass that gives the cheese its unique and inimitable aroma. Young fontina has a soft texture; mature fontina is harder in texture. Regardless of age, fontina is characterized by its nutty and rich, yet mild flavor. It’s not an overpowering cheese; its flavor can pair well with a great variety of other ingredients, and it also has a perfect texture for melting.

On the Bottiglia menu, fontina is one of the key ingredients that makes our crispy arancini so delectable.

Mozzarella: This is perhaps one of the best-known Italian cheeses, particularly because of its place of honor on top of one of the world’s favorite foods: pizza. Mozzarella is a type of soft cheese which is typically made from either cow’s milk or buffalo milk (the latter is referred to as “buffalo mozzarella”, which is considered a delicacy; read more about it here).

Fresh mozzarella cheese (whether made from cow or buffalo milk) starts by heating milk with a starter; the milk coagulates, and the curd is broken then soaked in its own whey, until it develops a texture which makes it conducive to pulling or “spinning”. Once stretched/shaped, the cheese is stored in whey. Fresh mozzarella is best consumed as soon as possible after being made, though it can keep longer if vacuum-sealed.

Mozzarella is an important part of the Bottiglia menu; you can enjoy it in our Rigatoni & Cherry Tomato dish, which features sciué sciué pasta, mozzarella, and basil, as well as in the Buffalo Mozzarella Panini on our brunch menu. Burrata, which is a specific type of mozzarella filled with cream, is also available on our Burrata and Tomato Caprese salad.

Parmigiano: This is a hard, somewhat grainy-textured cheese. It is also referred to as “parmesan” in the United States, or sometimes Parmigiano-Reggiano, which refers to one of the most popular production areas (Parmigiano refers to the Parma region; Reggiano refers to the Reggio Emilia area).

The making of Parmigiano is a production that requires patience and plenty of time. To start, a part skim mixture is pumped into large vats; a starter is added, and the temperature is raised, rennet is added, and the mixture is left to curdle. The curds are then broken into very small pieces and heated and cooled again. They are then put into large molds. After being molded, the cheese is transferred to a salt brine solution for a few weeks, and then transferred to aging rooms where it can age for about a year.

The cheese’s time in the salt brine before aging allows it to develop into a sharp, full-bodied cheese with a strong saltiness. The finished cheese has a slightly gritty texture, and is not necessarily a great melting cheese; as such, it is often used as an ingredient in dishes, or used as a finishing cheese after an item has been cooked.

Parmigiano is used to finish many dishes on the Bottiglia menu. It also figures prominently in our creative take on Chicken Parm, which features Jidori chicken, San Marzano tomatoes, and plenty of Parmigiano!

Pecorino: Like Parmigiano, pecorino is an aged hard cheese. Pecorino, however, is made using sheep’s milk; actually, the name is derived from pecora, which is the Italian word for sheep. While there are actually six key varieties of this cheese, perhaps the most famous is pecorino Romano, which also happens to be the most popular export variety.

On the Bottiglia menu, you can sample pecorino as part of one of our formaggi and salumi plates, which are fantastic for sharing; it’s also used in our roasted spaghetti squash side dish.

Ricotta: This is the softest cheese of the bunch–and we mean that in a literal sense. Ricotta is a cheese which is made from the milk whey leftover from the production of other cheeses. It can be made from cow’s milk, but it can also be made from buffalo, goat, or sheep’s milk as well.

“Ricotta” translates as “recooked”, which refers to the process used to make the cheese. Basically, whey is left to sit until it begins to ferment; it is then heated to near-boiling. This heating process causes a curd to form; once the mixture is cooled, it can be strained, leaving the curd behind. Just like that, you’ve got ricotta cheese!

Ricotta curds are characterized by a white appearance and slightly sweet tastes. Texture-wise it bears some similarity to cottage cheese, but is generally smoother. Ricotta is best consumed soon after it is made, and doesn’t keep for terribly long.

Ricotta is a team player in Italian cuisine, and shows up in a number of different dishes, both sweet and savory. Try it at Bottiglia for dinner in our spinach lasagna, which features ricotta, basil, and mozzarella.

It’s no secret that cheese is a vital part of Italian food’s inherent deliciousness. If you’re looking for great Henderson Italian Restaurants to enjoy a variety of authentic Italian dishes (and cheeses!), please come visit us at Bottiglia Cucina Enoteca. We invite you to take your time sampling your way through the menu, enjoying every bite.